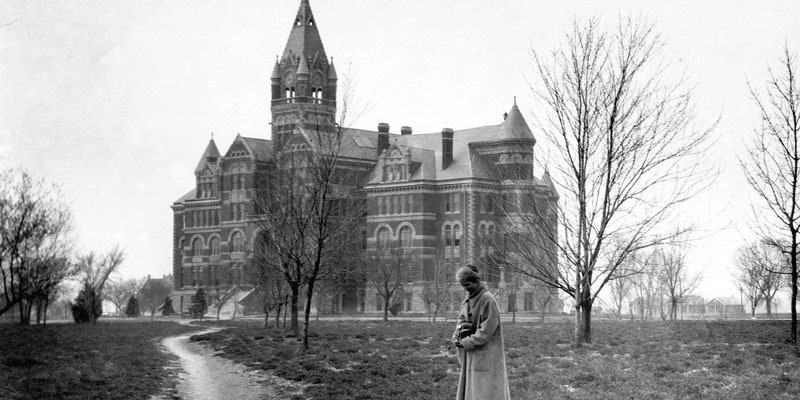 The mission of Friends University, a Christian university of Quaker heritage, is to equip students to honor God and serve others by integrating their intellectual, spiritual and professional lives.

Although Friends University was officially founded in 1898, our history goes back to the mid-1880s when the Christian Churches of Kansas began to construct a building west of Wichita that would hold more floor space under one roof than any other educational facility west of the Mississippi River.

Garfield University opened its doors for classes in 1887. The University had 500 students enrolled for the first year and 1,070 for the second year. After graduating its first and only senior class, Garfield University closed its doors in 1890 due to financial difficulties. The school was reorganized and opened again in March 1892 as Garfield Central Memorial University. It closed for good on Nov. 18, 1893.

For five years, the building was a haven for owls, birds and bats until James M. Davis, a businessman from St. Louis, saw an advertisement in a St. Louis paper and purchased the building and surrounding lots. He immediately offered the entire holding to the Kansas Society of Friends (better known as the Quakers) on the condition that the group raise $50,000 for the permanent endowment of the college. The conditions were accepted, and Friends University officially opened its doors in September 1898. The enrollment for the first fall was 52 students; it would grow to 102 students during the first year.

President Edmund L. Stanley shared the vision and future he saw for the University during the opening meeting:

The purpose of this school shall be to give to the world and to give our country a class of citizens that will be in every sense loyal citizens. Loyalty has in it more than we often think … Loyalty means that mental training and discipline which makes the child think – the development which makes him strong in mind and body; strong in his moral nature; a full man in that intelligence which should direct the efforts of all men for conscientious, honorable and successful private life and citizenship.

Friends University continued operating as a Quaker institution until the 1930s when governance of the school was vested in an independent board of trustees. Since then, the University has continued to operate in an amicable but independent relationship with the Society of Friends. The University continues to reflect much of our Quaker founders’ vision and values. This includes offering a transformative education that honors God and places special value on each individual, shining the light of God’s love to our community and world.

In 1989, Friends University opened its first Kansas City site to serve adult students in the area. After 15 years at several different locations (including a secondary site in Independence, Missouri, from 1995 to 2005), the University moved to a location in Lenexa from 2004 to 2015. In 2015 the current location in Overland Park opened with facilities for the Master of Science in Family Therapy program and teacher education workshops.

The University operated a site in Topeka from 1993 to 2016 that focused on adults seeking bachelor’s and master’s degrees. Friends began offering a few online programs for adults in the mid-2000s and has continued to expand our online program offerings.

Throughout its history, the University has remained committed to our central core: the arts and sciences. A broad-based education – one that truly expands the horizons and frees the mind – is our purpose for every student. This is also expressed in our commitment to teaching and to the personal growth of every Friends University student. We uphold the following values within our learning community:  Respect – integrity, civility in our words and actions, and regard for others; Inclusion – a spirit of cooperation and equality; Service – a commitment to servant leadership, caring for each other and our community; and Excellence – giving our best to our students at all times (student focused), that we may walk truly in the light of our faith (honor God).

Friends University has continued to grow and develop throughout the years. From 52 students in 1898 to approximately 2,000 students today, Friends University is a strong, vital, independent university for Wichita, the region, our nation, and the world.

View a couple of videos about the history of Friends University